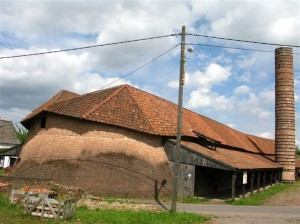 The first mention of brickworks in the area dates back to 1346, with a  ‘tichelengeleghe’ at the Blauwe Pan (street name).
The first land register data dates back to 1721, found when creating the Caertboek of Boom. There were 2 brickworks on the location of the site Noeveren. Around 1840 there were even 3 brickworks.
The family Frateur became owner by acquisitions in 1923 and 1947 of the former 3 small brickworks. They now had a large mixed brickworks: a typical Flemish hand-molded brickworks and a mechanized brickwoks.

Paul Frateur past away on August 28, 1986, he was the last active brick maker of the site. He had been working since 1973 to get the his brickworks classified as heritage, on the day of his dead the offical heritage protection was notified…
By now, the brickyard remained out of service. It’s purchase by Peter Swenden meant a new impulse. Yet it would still take years before the restoration, driven by a new board of directors within the association ‘t Geleeg, reached cruising speed. Now there is the prospect of a complete restoration and reconstruction.
In the mechanized section of the brickworks, we find the following components:
The hand-molded brickworks has: 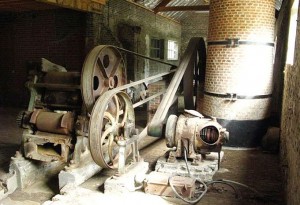